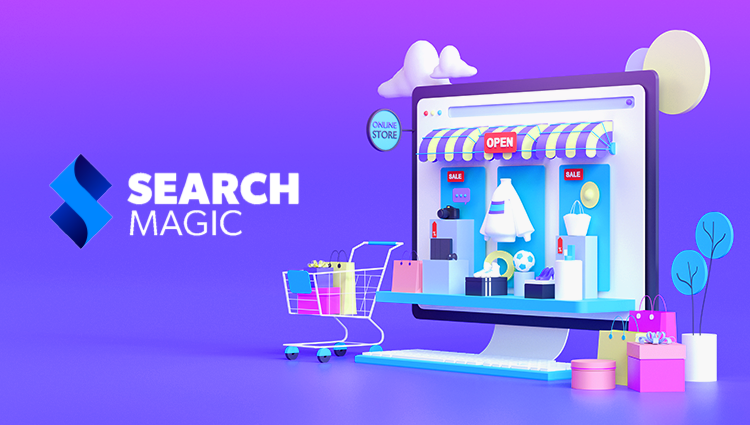 Many eCommerce store owners fail to recognize the potential of an important feature of their store. I’m not talking about product reviews or suggested items, I’m talking about the store’s search engine. That tiny box has so much potential once a shopper enters a query, but not every merchant uses it to their advantage.

If you have just a few products, the standard out-of-the-box search provided by your shopping cart provider may be all you need. But if you have hundreds or even thousands of items, that search is woefully inadequate.

So what do you do?

App developers, like Your Store Wizards, realized that an online store’s search engine should do more than just direct shoppers to a product. Armed with information about shopper’s habits and search data, developers began to build 3rd party apps with dozens of features designed to quickly connect shoppers with the items they’re looking for and increase order value.

While these 3rd party search applications come with a monthly charge when they are fine-tuned they can easily pay for themselves with the additional sales they generate.

For example, misspelled words are a large source of lost revenue for store owners. The free search feature included in most eCommerce platforms doesn’t account for misspellings, while 3rd party apps do. You can add common misspellings for items and brands in one of these 3rd party search apps that automatically show results for the intended product.

Another example where a 3rd party advanced search application can help is with synonyms. Let’s take soda for example. In some parts of the country, it’s called pop, while in other parts it’s called cola or simply soda. By setting up synonyms for items that are known by several different names you can rest assured that when someone searches for one of those terms, relevant items will be shown.

We all know that shoppers want to find things quickly, so making sure you get exactly what they’re looking for in front of them right away is key to capturing the sale. 3rd party search apps employ a feature commonly called “instant search” to do just that. You’ve probably seen it in action and used it without even knowing what it’s called. This feature displays search results “instantly” as the shopper is typing in the search box.

These are just a few of the different ways your store’s search can generate revenue for you and pay for itself every month. However, there’s a common misconception that these advanced search applications are expensive.

Let’s work on dispelling that.

Now, there are search applications that do cost upwards of a thousand dollars or more per month and lock you into at least an annual contract. We feel that’s unnecessary and if we’re being honest, there are less expensive alternatives with comparable feature sets and no contracts.

Your Store Wizards introduced our own advanced search application, Search Magic, nearly a decade ago for the Yahoo! Store platform. Today, Search Magic is the search engine of choice for some of the largest Yahoo! Store merchants.

In 2020, we made Search Magic available to merchants operating on the BigCommerce and Shopify platforms. Packed with the same features found in those thousand dollar a month applications, Search Magic starts at just $19 a month for Shopify and $49 a month for BigCommerce, and both offer a free trial. Plus, we never lock you into a contract. Search Magic is sold on a month-to-month basis.

If you’re ready to take your eCommerce store’s search to the next level and turn it into a profit center, click here to learn more about Search Magic, its features, and how you can install a free trial on your BigCommerce or Shopify store. With easy self-installation (or we can do it for you), unparalleled support by our own US-based team of developers, you won’t find a better 3rd party search than Search Magic!