eCommerce Web Design “Back Then” Versus Now 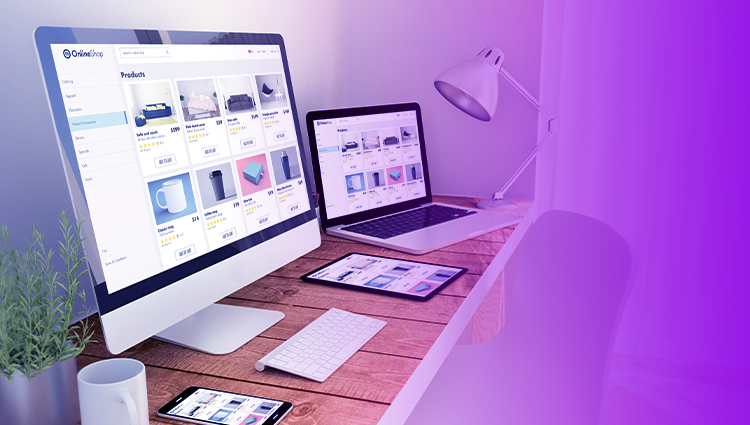 Today we’re going to take a trip back in time, back to the days of early eCommerce store design. Now, I could wax nostalgic about all the fun we had back then as trailblazers in this new thing called “online shopping” that some said would never catch on. But instead, I’m going to talk about web design then versus web design today.

It’s the late 1990’s / early 2000’s and we’re in the middle of the “dot com boom” and eCommerce is hot, and frankly, website design back then was not. Sites were built using clunky code, the layout was not all that customer-friendly, graphics… well, let’s just say “animated gif.” Plus, high-speed Internet wasn’t really “high speed” compared to what we have today.

Sites were built to look pretty and capture the attention of the shopper by using lots of flashy elements much like window displays in department stores. They would take a painful amount of time to load, but back then it didn’t matter all that much – a site with a four-second (or more) load time wasn’t all that abnormal.

We just dealt with it.

If you don’t believe me, take a visit to the Wayback Machine and punch in a few URLs and go back in time to see what eCommerce stores were like 20+ years ago.

Don’t say I didn’t warn you!

It wasn’t until the mid to late 2000s that speed became a factor we all began to be concerned with. Faster internet connections meant slow loading websites were no longer acceptable and designers began cutting a lot of the heavy design elements, such as big graphics, animations, videos, and other bloat from sites.

I remember working with a client on a redesign around this time and she was concerned about removing a lot of these elements and how her customers would react to a design that didn’t include a lot of glitz and glamour. Throughout design calls, we would go back and forth about what would be kept and what would be scrapped. During one call I vividly remember a conversation about her wanting to keep an element that was not necessary and was more bloat than it was worth.

“Don’t sh#t it up!” Were my words that resonated with the client and we still laugh about it today.

“Don’t sh#t it up” is how we all think about design today. Websites, eCommerce or otherwise, have to be built to load quickly on all devices. That means sites need to have a minimalistic design while at the same time providing customers with an outstanding shopping experience.

While it may sound like a challenge, it isn’t. Programmers use clean, lightweight code that has evolved over time to be efficient. They build features and apps that add minimal load time with maximum functionality. Designers lay out pages that make it easy for shoppers to find the information they need, add to their cart, and check out quickly. They don’t overuse graphics or elements that will contribute to load time while providing zero value to the shopper.

eCommerce stores built today are lightyears ahead of their primitive ancestors. However, there are still some that can use a bit of a refresh.

Generally, if it’s been a few years since you’ve given your online store a refresh, you’re overdue. Old, outdated code may very well be contributing to load times that are simply not acceptable by today’s (and Google’s) standards. Not having a design that functions properly across multiple devices is the equivalent of a mortal sin in today’s connected world. And let’s not even talk about a cluttered design that’s more of a turn-off than a turn-on.

If you feel like I just described your website, let’s make 2021 the year you make the investment in improving your business, and here’s how we can help:

Step 1: The Consultation
Schedule a time to talk to us about your store and your business in general. Let us know how things are, what your plans are for 2021, and where you want to be by this time next year.

Step 2: Our Recommendations
After that chat, we’ll come up with our recommendations for you based on our two decades of experience doing what we do best – helping store owners be successful online! Maybe we’ll find that your design is up to snuff, but your code could use some tweaking, or maybe we’ll recommend a whole new look. In some circumstances, we may even recommend moving to a new eCommerce platform that could serve you better.

Step 3: Put the Plan in Place
Here’s where we really shine. When you engage Your Store Wizards in a project, you’re working with a small team with big ideas. You get personalized service from the people actually doing the work on your store – not a middleman or someone relaying information from someone else. We make a personal investment in your project as we know the success (and growth) of your business depends on us.

If you’re ready to have a conversation about your eCommerce store, simply fill out the form below and we’ll get to Step 1 right away!